Have You Bought Glasses From Costco Optical?

Tell us about your experience with Costco Optical! 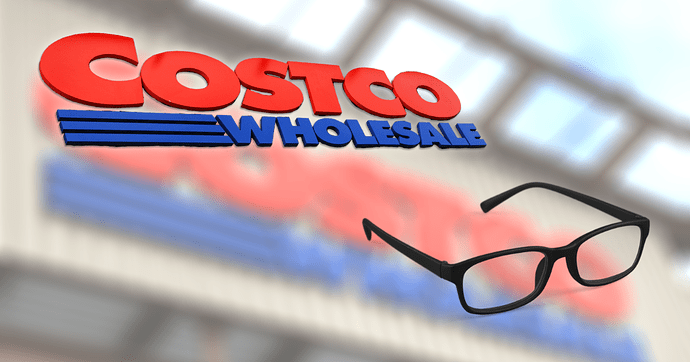 4 Things To Know Before You Buy Glasses From Costco Optical

Costco Optical offers a full range of eyeglasses and eye exam services. But here's what you need to know before making your first purchase.

One Complaint.
I like the Nose Bridge Frames… not a lot of choice in my size.
Got a frame at Costco, liked it.

Next time, they said my frame was discontinued.
Found the frame on line at a good price… bought several…
Costco has a charge for Bring Your Own Frames.
I explained that it was not my fault they stopped carrying my frame.
The frame is still available on line… “discontinued” by Costco.

That said, I still use Costco optical, priced OK convenient for Adjustment etc.

I wear Progressive Lens. It is important that the line is drawn appropriately.

I buy all my eyeglasses at Costco because it’s convenient and cheap. My wife is more of a penny-pincher than I am but she’s also more picky about style. She buys about half of her glasses from Costco.

I take a few minutes to select a couple of frames. My wife spends maybe an hour when selecting her frames.

Costco doesn’t carry hi-index lenses above 1.6, so I won’t use them.

After 40 years of nothing but contacts, and later supplemented by readers, Costco introduced me to progressives in 2017 and I haven’t looked back. I have, however, looked up and down and left and right and it is amazing. I used their in-store ophthalmologist and it was great. Now maybe it’s because I was tired of dealing with all the contact issues, or having to tote along readers to see up close, but I gotta say that I love the progressives. I had Perry Ellis frames that were just stellar and lasted me until an ocean wave blasted them off in Costa Rica last December. DUH. Do not go in the ocean with glasses on. The new frames are generic-ish and they’re OK, but not as comfortable. But those progressive lenses - wow. Love 'em.

I have gotten all of my eyeglasses from Costco for many years. I do have one issue: even using Costco’s own “cleaning kit,” my lenses (progressives) tend to fog up from cleaning liquid (or even just tap water) entering the interior of the lenses. This generally begins within a few months, and after a year, the lenses need to be replaced. At $180 a pair, that gets expensive! The manufacturer should (in my opinion) apply some sort of sealer around the lens edges to prevent this.

I have gotten all of my eyeglasses from Costco for many years. I do have one issue: even using Costco’s own “cleaning kit,” my lenses (progressives) tend to fog up from cleaning liquid (or even just tap water) entering the interior of the lenses.

Are you saying your lenses are made of more than one layer? And that there’s a space between them that traps the water?

I don’t believe I’ve ever owned a pair of glasses like that.

My wife has worn progressive lenses from Costco for many years, and regularly cleans them with water and/or lens cleaner, and has never had that problem.

Within one week there’s a spot of bubbles in my lens right in the center . I went back to Costco and they tried to clean the lenses and scratched them really bad. They told me glasses have a life of their own after you take them off. Don’t know what she was talking about but that is what she said.
They did order replacement lenses and eight days later I got my lenses. One week later and the same thing happened. Now the spot is getting larger every day.
I have wore glasses for over sixty years and even the cheep on line glasses last longer

Costco glasses are a waste of money

Sorry to hear this. I have been getting progressive lens from Costco for years… they have been great. Costco does not carry the Verilux so I was a bit cautious but their Progressives are fine.

My wife use to insist on a local optical store. She finally switched after much encouragement and has been very happy.

Did the Costco Rep give any reason for your problem.

I suggest you ask what material your lens are and google for problems. Also is your prescription out of the ordinary like very thin in the problem area.

I have been buying glasses at Costco Optical for more than a decade. They are not in network with any of the insurance companies I have been using. The cost of glasses at Costco is cheaper for my glasses and my wife’s glasses combined, than mine alone from an in network provider.
Recently my wife had an issue with her glasses. She mentioned it and Costco replaced them at no cost.
They do have a limited selection of only a few hundred frames to select from.

Doesn’t seem like a very good value to me. America’s best will give you the exam and two pairs of glasses for $79 or $99 for bifocals. I just ordered mine last week and should get them early next week.

I’ve bought glasses from Costco twice now and plan to continue. I’ve found frames I love and the lenses are good with all the bells and whistles. I wear bifocals with lines. The price is great for really good glasses - cheaper than I used to pay with insurance! I get my exams at my regular eye doctor because of some problems that need monitoring and they have a long history on me.

I had issues at Costco with inexperienced staffers trying to adjust my frames, and had to take the glasses to an independent, experienced tihrd party eyeglass shop. This has happened multiple times, and the lens durability wasn’t the best. I give them a B- or C+ grade. The price is good, though.

I am on my third set of glasses from Costco. One pair are prescription sunglasses, the other two are progressive lenses. The frames are great quality, at only $69. I have found similar frames at Walmart for $129. I get the scratch coat, chip resistant, and anti-glare put on my lenses. The only bummer is that I like the blue tint that goes along with the anti-glare, but due to many complaints about it, they discontinued the tint. Anyway, the glasses and frames hold up nicely for me, and I am not gentle on them either. I work in my garage welding with them on, grinding, sanding, spray painting too. They take a lot of abuse, and hold up nicely. Never had a damaged frame or lens. I keep my glasses for about 3 to 4 years before getting a new pair. My sunglasses however are at least 15 years old. I use them for driving, otherwise they have no other purpose, because I cannot read with them.