First, a ground crew had to install the cable connection form the street to the house.

The ground crew was scheduled for the initial cable ground installation for July 27, 2022 at 3:15PM. I received an email giving me notice that this was cancelled on Jul 27, 2022, 3:08 PM without explanation as to why it was cancelled.

On Wed, Jul 27, 4:22 PM in a live chat a Google representative identified as Joaquin advised, “It looks like we were unable to finish building the Fiber line to your home in time for the installation, so that visit was cancelled to give us time to complete that. I’m really sorry for the delay in construction there! My construction team mentioned they plan to have this resolved and you install ready within 3 days, but that is just an estimate. The very moment that is completed and you’re ready to be installed, we’ll be emailing you directly to reschedule that installation.”

Thu, Jul 28, 5:33 I cancelled the installation deciding to continue with Spectrum.

On Thu, Aug 18, 8:54 PM because of continued problems with Spectrum I again signed up for Google Fiber 1 Gig.

The ground crew for the cable to house install arrived and installed the cable connection on the east side of the house. My two desk tops are in a room on the north side and to get the best speed I need a direct connection to cable.

I had been told by a Google Sales person that I could have to point of entry anywhere I wanted it.

I tried to discuss this with the ground crew but they did not speak English and I do not speak Spanish.

On Wed, Aug 24, 7:07 PM in a chat a Google representative identified as Abigail T said, “Thank you for that. I can see we had to cancel the installation due to you requesting a consult. A Consult can delay the process by several weeks but once completed we will follow up via email to have you reschedule.”

I did not request a consultation.

I waited for them to get in touch with me and then visited with my next-door neighbor who has GF and got my questions answered. I observed that his point of entry is in the back of his house on the 2nd floor where his office is.

On Fri, Aug 26, 4:32 PM I cancelled the consultation in a chat with Google Representative Abigail.

He said he could not install through the back wall into the basement.

He installed the point on entry into the kitchen and a speed test over Wi-Fi in the office revealed an unacceptable down load speed of about 80 mbps.

I told him to cancel the installation.

After some measurements and discussion, he installed through the back of the house into the basement and strung the cable across the ceiling of the basement and created a point of entry into the office and installed a direct connection for one of my two desktops.

I got about the same speeds on Spectrum.

The reason I quit Spectrum is because I had to reset the router between 1 to 3 times per day because it would slow down to an unacceptable speed.

I found that others have had the same issues. Numerous calls to Spectrum failed to correct the issue.

The Google installation was supposed to take two hours. It took three hours.

The Google Tech arrived, gave me a 5 port switch box which solved the problem with making a direct connection to the internet.

He did some testing with the WiFi and shows me how to use the Home App to do a reset.

This is acceptable if stable.

It was not stable and I reached out to GF by text and was referred to a Web page that was no help.

I reached out again and told them I was cancelling if they did not resolve the problem.

They sent a tech out and he tested it and fiddled with it and we got the speed up.

At that time he installed a switch so that both lap tops are now on direct connection.

Long way for the gig they are charging me for. 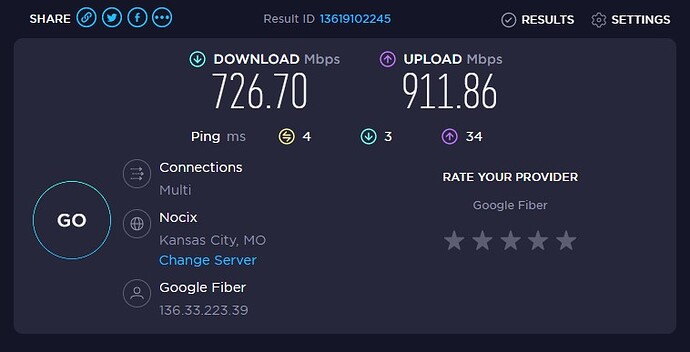