Which cell phone plan do you love? Did you find a great deal? Tell us about it! 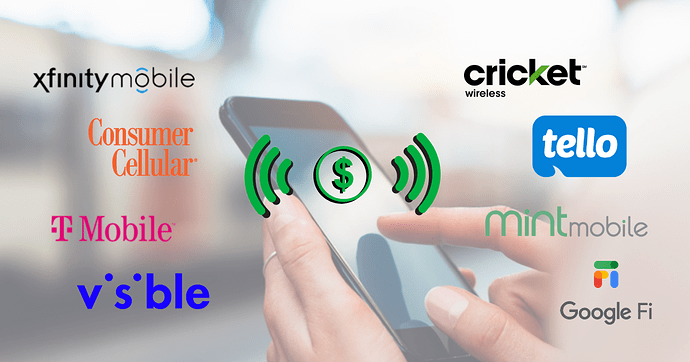 I’m a notorious bottom feeder, thanks to a Clark segment many years ago, for Virgin Mobile, with a phone and a year of prepaid minutes from Scam’s Club. It sent me off bottom feeding prepaid. Not relevant today as all things change. Oh and that phone was the worst I ever owned, dubbed Abominovox 8500.

The network is what is most important! It must work where you want it to. After years with AT&T and Cricket, I was unhappy with dropped calls. Understood that T-mobile was not much better. Thus hoped to get on Verizon network, but not directly.

Current main phone is Xfinity, by Commie Cast. You have to have cable service to get it. Think Spectrum has a similar deal. I have unlimited talk and text and a gigabyte of data for $15/mo. Finding that if I am careful I can stay well under the gigabyte and not pay more. You only need unlimited data if you use a lot of data intensive stuff, starting with graphics, and especially moving ones.

I have tried T-Mobile, Cricket, Credo, Consumer Cellular and other discount plans over the course of many years. The first three were horrible for various reasons; CC was OK but coverage was bad and every time you went over, you were automatically put into the higher plan. I am happy to report I have found my “forever” plan with Google Fi. The coverage is exceptional, and you only ever pay for the exact number of minutes you use. My average monthly bill is cheaper than any other discount plan I have tried. I bought my phone outright, which is my preference, so there may be cheaper plans if you pay as you go at the other discount carriers, but in terms of no hassle, low cost service and great coverage, Google Fi has been the best.

I don’t need cellular data and I’ve found that textnow.com offers a SIM card (running on the T-Mobile Network) that offers free unlimited calls and texts for $0.00/month!

I’d say that for those like m e who can get by using WiFi when needed for data this is a great plan to choose.

I have tried different plans in the past. the problem is that with MVNO’s and non-MVNO’s except Verizon, in New Hampshire, aside from the I-93 North-South corridor, only Verizon had decent coverage West of that corridor. (At least the last time, a couple of years ago, we were NOT on Verizon, but a Verizon MVO.) And since my wife and I are active outdoors: kayak, hike, bicycle, snow-shoe, cross-country ski, etc.; we would need the coverage, just-in-case!
GOOD NEWS is that with 2 of our 4 children and us on a Verizon family plan with auto-debit. it only costs us $70 for the TWO of us including taxes and fees for unlimited!

You are so right about the MVNO’s…they might be on “Verizon’s Network”, but they DO NOT HAVE ACCESS to all towers in their network. MVNO’s including Visible DO NOT allow ROAMING and you will miss access to towers in areas that can be in the middle of nowhere, like in Lake City, Colorado where if you are not on Verizon post-paid, you will not have access to the privately owned tower.

PLEASE, CLARK HOWARD, TELL PEOPLE what they are MISSING with MVNO’s. People are not getting the full story and missing connectivity that they might need in a real emergency.

I have been using Mint Mobile for several years. I pay $15.00 a month for 4 GB of data and unlimited text and talk. Excellent coverage and I pay once a year and forget about it until it is time to renew. If I refer someone, we both get a discount.

At least they (CC) don’t charge you for going to the next plan.

Just read the new article about Cricket. What is the fascination with that? We have been with CC for years and are fortunate to get the ATT network. We have two phones 3GB of data and unlimited calls and texts. Cost before taxes is $45.00 for both lines.

Now I’m worried about the MVNO. Verizon just put up a new tower (very nearby) because we are in an area that the entire Country seems to be moving to (Idaho) and within 3 months the new tower was full too.
If I switch to Visible and manage the MVNO jackpot, will Verizon automatically be gone or do I need to cx them, then switch? TIA

What carrier does Google Fi use?

As I understand it, Google Fi uses whatever tower is available on either US cellular or T-Mobile (and switches between them according to what has the best coverage). Verizon still has the best coverage so it’s too bad that they can’t use Verizon too, but I haven’t had many issues with coverage using Google Fi. The ability to use your phone when traveling abroad at no extra cost is also a great feature that other carriers do not have.

Lies lies lies about Visible download speeds. I live in Dallas and consistently get 35 to 99 mbps

I’m in a somewhat rural area.