The shrubs in my back yard rock garden grew to 6-7’ tall and overwhelming. Had them all ripped out. [first pic] Then planted nice 6" shrubs with sprinklers.

In no time, the weeds took over! [second pic] Believe it or not, there are nice little shrubs hidden in there. 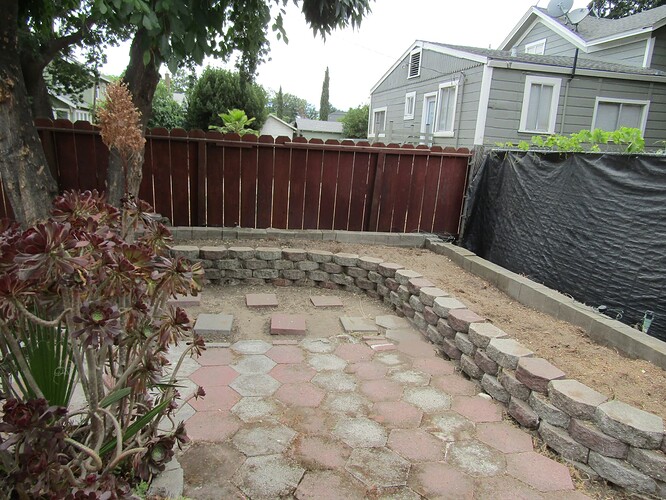 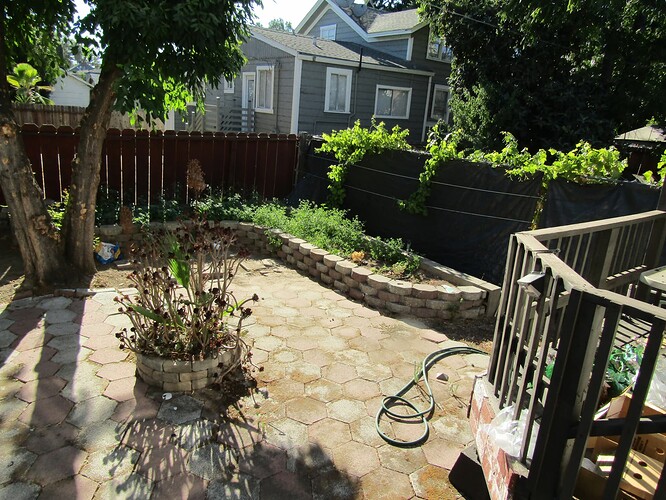 Have someone pull out the weeds and then put a 2 inch coating of mulch over the area.The mulch will prevent 99% of the weeds from germinating.

Perfect. I also read a layer of thin cardboard or newsprint then the mulch?

Don’t really recommend the cardboard. You want the water to to reach the root system.

If you have a paper shredder, you can use the remnants after shredding newspapers. Probably stay away from any newspaper that has color on it’s pages.

Yeah, so I’ve read. So why is it still allowed?

You can also try Preen. It prevents weed seeds from germinating. If you decide to go with mulch, get the right kind for the bushes. Azaleas for instance need acidic mulch such as pine needles and bark, not the shredded brown mulch at the big box stores.

Perfect. I also read a layer of thin cardboard or newsprint then the mulch?

Landscape fabric is more effective and durable as an underlayment. Then a gravel product like “rockbark” will deter weed growth well. After that a late spring application of a pre-emergent like Preen should do the trick.

Here’s a pic of the gravel product they call “rock bark.” 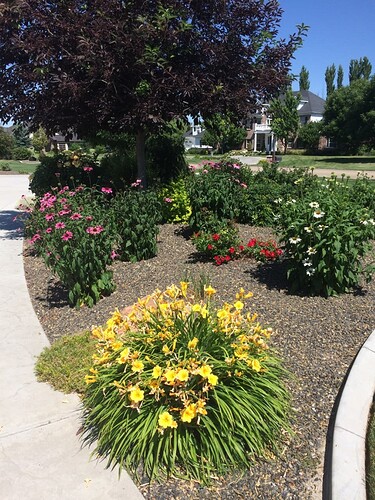 Pull the weeds, then put down weed barrier tarp and cover with river rocks. My landscaper did that for me and it looks great.

What works best in one location isnt necessarily the best in another. You’re in San Francisco, right? I really don’t know how the soil is there, but much of the west is very alkaline. Plants that are native will thrive better than ones that aren’t.

Pulling weeds will get the roots, but where there is a void, something else will fill in. Decide what you want to grow there, that fits the space, the climate, the soil, and the amount of sun/shade. You could do anything ranging from veggies to herbs to ornamentals. Or a mix of those. Go to a local garden center (not a big box store), and ask for recomendations based upon what you want. Organic methods will probably give you better long term results. I would definitely not use roundup. It is a pretty horrific chemical…just take your morning coffee or evening wine out and spend half an hour or so enjoying the outdoors and pulling weeds. They’ll all be gone really rapidly.

Many thanks. 14 years ago, I bought a yard of soil from the county park dept and told it would grow anything. That is true! My first effort was a mix of flowering shrubs and when they bloomed, I was suddenly overwhelmed with bees! Gazillions! In no time, I had hives under the eaves. Yanked the plants and needed a bee keeper to get the hives. What a mess…!

[then, too late, recalled why my late wife did not want flowers. Bees!]

Then planted non blooming plants, added sprinklers, and in a decade they became gigantic, 6-7 feet tall, overwhelming, and beyond my ability to tend.

Had them ripped out and now starting over. My little rock garden has become an small adventure.

Some flowers attract bees more than others. And all plants grow to more or less a specific size: some to a large size; some to a more compact size. The ultimate size can be somewhat controlled by pruning, but it’s really better to choose plants that. fit the space rather than ones that will grow to exceed the space. I personally wouldn’t have had a problem with 6-7 ft plants, but that’s me, not you.

I don’t mind bees, but wouldn’t want hives. (Bees are actually very good for the environment, and are declining).

I know the Master Gardeners in my county are happy to make landscaping recommendations when asked for ideas. You might want to contact your county extention agent and see if there are similar programs there.

Thanks. For some reason, the bees decided to build their hive in the eave right about the back door. Opening the screen door disturbed them so they buzzed around the door and I had to walk through that to get in or out. Not acceptable.

I’ve had several swarms over the years. Definitely not fun. Scariest, yet ultimatrly the one eith the least impact was when a large swarm took a long break in the corner of our EasyUp at a race. Fortunately, they migrated on after 6 or so hours. Most of the swarms found an entry into our house…two different houses, quite a long time ago, but in all cases we had young kids.

I had forgotten what happened in 1989 when we bought this house. In the late fall, we proudly planted all kinds of blooming around the house. As spring arrived, I noticed some bees, but came home one day and the plants were all gone. Wife saw the many bees at both doors and paid a neighbor to yank the plants.

I won’t yank plants because of bees, but i would explore options to get them to move to a better location. I had one buzzing around in a bed while i was filling up a waterer for some of my chicks. I figured it mostly wanted the water. I have less tolerance for wasps.

I have less tolerance for wasps.

I have a Hummingbird bird feeder and there are a couple of wasps that visit the feeder. They are very aggressive towards the “little guys”.

I have a Hummingbird bird feeder and there are a couple of wasps that visit the feeder. They are very aggressive towards the “little guys”.

We have a couple of hummingbird feeders… the little guys are pretty aggressive with each other too!