Windows 11 - not that happy

I would recommend the registry edit method. 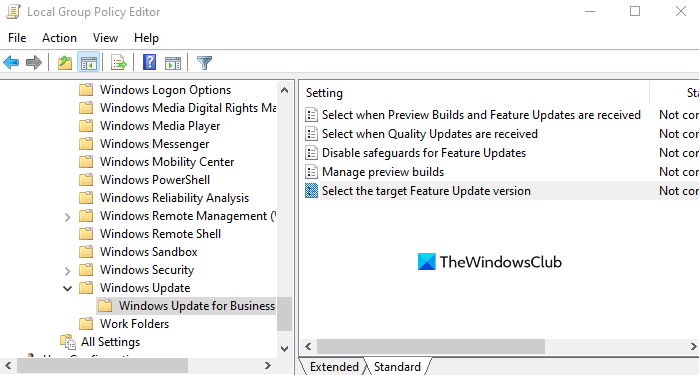 How to block Windows 11 from being installed on your computer

If you are not ready, you can block Windows 11 from being installed on your Windows 10 computer using Group Policy or Registry Editor.

I can’t remember the year but I was a geologist working in a small geotechnical engineering company. A technical school was near where I took evening computer classes for fun. They offered Netware classes and Windows NT 4 networking. Netware was king but NT was gaining ground, I believe, because of the GUI. I was able to learn enough NT to install my company’s first server/domain controller. I don’t know that I could have done it with the Netware command line.

I can’t remember the year

It was probably in the 1992-1995 timeframe. The 80’s was when the great LAN wars were fought. That was followed in the early 90’s by all kinds of file and application sharing solutions that ate into the big mainframe market. Microsoft was determined to get a bigger slice of the commercial market by utilizing their installed base of PC’s.

The next computer wars will be fought using quantum computing technology.

I’ve been running Linux Mint for the past 6 years or so and am very pleased. I don’t run proprietary software that requires Windows. I dont’ run anything under WINE, But I run LibreOffice, which is not as robust for some things, but for household use is a good alternative to Office. I run KMyMoney for finance. It works very well. I don’t have any updates install automatically, I there is an icon with an exclamation point at the bottom, and from there I can pick and choose what to update, if that what I want… I’ve done 3 OS upgrades…they are super easy. Plus - I can continue using the computer while the OS upgrade is running.

I have Windows 10 on one of my computers and would love to dump it. I use it for an hour a month to attend a Webex meeting. Webex for Linux does not work well for me.

I did some part time work from home last year and Autodesk had a free Windows utility to translate files between AutoCad versions. It saved me time and my client money. I don’t think there is a Linux version. I was using QGIS, a free GIS application, to produce my work product on Linux Mint.

My point is that I have learned it can be hard, or maybe impossible, to totally escape from Windows.

Linux is good but like moving from win 10 to win 11 there’s learning curve to navigate Linux.

I have one Win10 laptop which cannot (even if I wanted) be upgraded to Win11… Other than that my two desktops are running Win7.

Other unused various computers in the house include an Android desktop (Remix) a couple Raspberry Pi’s and a Beagle Bone.

I have various operating system in VirtualBox and a mainframe VM for the HP3000 which allows me multiple included languages (Fortran, Cobol, BASIC, assembly, etc and has the great Image/Query database management system). It runs on my Win7 box,

I know this thread has wandered off the original post, but another thing to consider when discussing alternatives (Win 7, Linux, …) is that even if you felt comfortable re the possible security vulnerabilities of running an older Windows, Microsoft has made it difficult or impossible to install older windows versions (Win 7/8) on newer hardware. This is one thing I think driving some of the interest in Linux and Mac; if I’m going to be forced to change OS anyway, why stay with Windows and its OS-embedded spyware?

Ah yes why stick with windoze? Where there is mediocrity in computing, micro$oft is often close at hand…

Back to the earlier stuff mentioned, Netware was indeed king of small networking. Novel CEO made a run at micro$oft by purchasing WordPerfect Corp and its superior word processing that was not really equaled by m$word for a number of years. But they won the war and wordPerfect sunk into oblivion.

The only windoze I run on a regular basis is a work supplied computer, managed by their IT people. Windoze 10, and they are reminding us regularly NOT to “upgrade” . If it breaks, THEY fix it because life is too short to mess with windoze.

Here, I have been on Linux for many years. Indeed if I had not gotten a class and learned some UNIX, I think I would be in abject poverty having retired as a Walmart greeter. Didn’t happen though and I am on my last and 2nd longest career at over 10 years. I administer RedHat Enterprise systems at work, and use Linux Mint at home. If i had something that required windoze, I would simply build a windoze system in VirtualBox and use it when I had to.

Final note and a little comparison: Here I have an Asus Zenbook. SSD I think, supplied with windoze 10 best I can tell. On same disk is Linux Mint 21 that boots ready to login in 16 seconds while win10 takes 32! Pique someone’s imagination?

Novel CEO made a run at microsoft by purchasing WordPerfect Corp and its superior word processing that was not really equaled by MSword for a number of years. But they won the war and wordPerfect sunk into oblivion.

In the early days of the PC, it was Wordperfect, Lotus and dBase. It seemed they would be the standard Aps for the long haul. There were also other contenders, WordStar Paradox etc

So what happened? Did Microsoft play fair?

Windows changed all this.

First by default, everyone , especially large companies dealt with MS. They had the Customer base.

So when Microsoft developed a replacement for DOS, … Windows, they also were in tandem developing Office… the knockoff of all of the above. Whereas MS was using Pooprietary Design Specs and Beta versions of Windows to develop Office , the other companies were stuck with DOS. MS did not provide advance copies of Windows. This gave MS about a year head start Aps that worked with Windows on everyone else and so it went.

===
Sadly I remember a coworker asking if I thought he should buy MS stock. I told him I thought Lotus was a better bet.

I failed to understand the importance of owning the Operating System.

In the early days of the PC, it was Wordperfect, Lotus and dBase. It seemed they would be the standard Aps for the long haul. There were also other contenders, WordStar Paradox etc

In the EARLIEST days of the PC it was DOS 1.0. and the initial primary applications were EasyWriter for word processing, VisiCalc for a spreadsheet and Microsoft Adventure as a game. Those application programs also came in an Apple II version.

My IBM PC in 1981 came with 16KB of RAM and two 5.25" 160KB floppy diskette drives. I wanted a color monitor and IBM had the CGA color display adapter but had not announced a color monitor so I bought a Sony ProFeel monitor and built my own cable to go from the CGA PC output to the RGB input to the Sony display. Total price was around $5K.

Here’s a pic of the VisiCalc diskette and the DOS 1.0 manual: 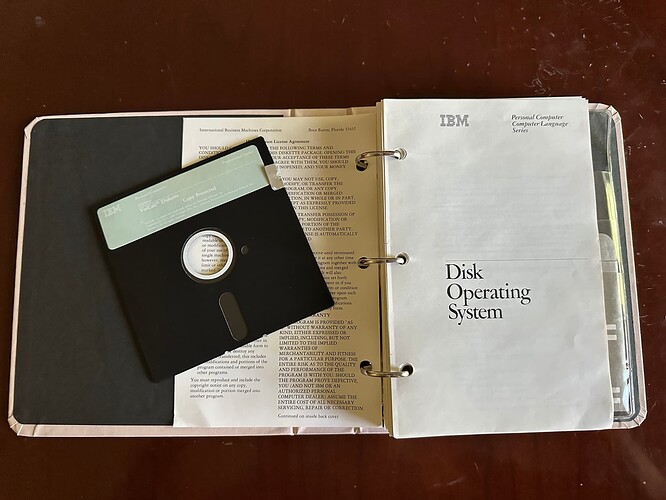 I did not jump as fast as you did, so I got 2 320 full size Floppies.
Later I added an AST SixPacPlus Board (640 Mem plus 5 other features) and a 20 meg Qubie half high drive along with a Half high 320 to replace the right full size drive. The Qubie was great, wonder where they went.

You mentioned price 5K. My wife had written Fortran for a CDC PDP-4. I remember asking how she felt about spending big bucks on a computer. I still remember her answer, “If we can’t figure out what to do with it, no one can.”