It otherwise opens and closes normally with with the controls that we have in the house, the one on the wall in the garage and the one in the car.

We cleaned sensor beam lens and there are no obstructions.

Any thoughts on what be be causing this?

Someone probably has a GDO code very near or identical to yours. I’d call in an expert, they can probably change it to a different code or frequency.

Or… it could just be a faulty receiver or code reader.

This happened to us twice about an hour apart… but not since.
We assumed that someone going by had a device of some sort going in and triggered again as they were leaving.

Thankfully has not happened again.

These work by radio. Someone near you may also have a similar unit and their control is opening yours.

You could shorten the antenna on the unit inside the garage which would lower the distance you can use your remote.

AS AN ASIDE: If someone has a remote that won’t work anymore even after changing batteries, let me know by private message. There is a cheap cure to replace all the remotes as long a the push button on the wall still works. That means the unit works, just not the remotes.

Someone near you may also have a similar unit and their control is opening yours.

I’ve also heard that some of the bad guys can use transmitters that broadcast multiple frequencies and codes while driving through neighborhoods to see if any garage doors open. Some recent GDOs that I had replaced used more secure receivers in them and are more secure. I think the change occurred between 2012 and 2015.

Maybe it was an analog vs digital thing.

Then again, SOMETIMES it is the Navy 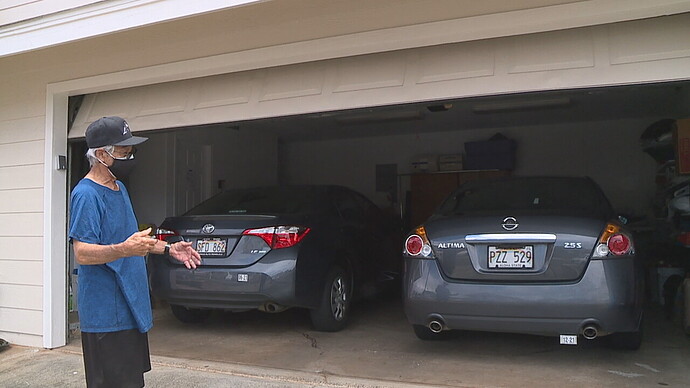 It is happening again! Garage doors and key fobs for cars are not working in several areas on Oahu. Navy ships were to blame for blocking the signal of remote-controlled devices in the past, but th…

Those frequencies are nothing special and not necessarily protected.

Garage door openers often use a radio frequency which is in a shared service band. I can’t speak for all, but many have a set of digital pulses sent on a frequency in that band. Manufacturers use dip switches to control either the frequency within that band or the digital signature they transmit on a single frequency.

Another possibility is mice or rats. You system also more than likely has a pair of wires inside the garage going to a button which is usually a doorbell type button. It shorts the two wires and that momentary closure tells the door to open or close. If the wire is frayed and barely touching or an animal has chewed on it, it would short when moved like in a breeze or whenever. This is less likely than the errant radio signal.

Because the systems also use that wire and push button, I was able to fix a couple of the neighbors garage door openers when their remotes failed and the company said to replace the control board at a cost of perhaps $50 to $100. I went to Wish.com and bought some remote control fobs and a board for something like $9. IT had multiple fobs and the board could be adjusted for momentary closure of a relay. That relay would short the two wires for just a second simulating a person pressing the button on the wall. The unit was powered by a small power supply I had here for 12 volts. A simple cure for eliminating the malfunctioning board and costly remotes.

Thank everyone for your insights. Much appreciated.

Somehow, after the second time unplugging the door opener, it is not randomly opening. I am also suspicious about there being a short in the garage pad as was pointed out above, so we are avoiding using it as a precaution.
Thank you all again.

My opener does that once in awhile. I found that when the door hits the floor hard and has tension on it, it will later open. I just set it to gentle touch the concrete with no pressure. Guess it is the safety feature that suppose to back off the door if it hits something going down.

To close the loop, we believe we’ve solved the problem - a faulty remote which somehow could trigger the opening by a slight touch.

Since the bad remote has been moved off site, no issues.

Thank everyone for their comments.