Coke Products Will Come in a New, Smaller Bottle This Summer

Smaller bottle. What do you want to guess that the price will be the same as the not-smaller bottle?

We already have them in Atlanta 7.5 Ounce cans… you have to be careful if you want “THE REAL THING”. 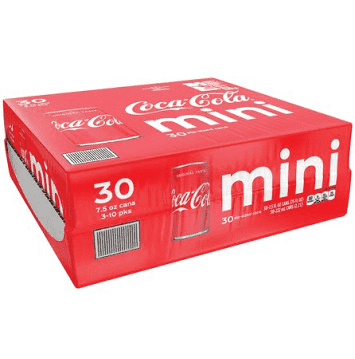 Politicians would call that a 20% increase…

over the original 6oz bottles.

Coke has had those mini cans for at least a decade. I’ve seen instances where the small cans were priced almost the same as the 12 oz cans, and the 19 oz bottles are often priced less than the 12 oz cans.

I remember in 1989 buying a 32 oz bottle of Coca Cola for $1. The price stayed in that range for decades.

I know the cans were made smaller quite some time ago, now the bottles.

We have all seen those little six ounce cans of coke. They are more expensive than any of the other containers Coke offers. Kind of stupid to pay more… for less.

I use unit pricing. Most times I am buying a generic.

We have all seen those little six ounce cans of coke. They are more expensive than any of the other containers Coke offers. Kind of stupid to pay more… for less.

And I thought they were stupid thinking folks would pay for Bottled Water in a country with good water.

Just drinking bottled water thing started about 20 years ago. For some reason it was kind of like that bubbly water from France that everybody thought was just the cat’s meow… Perier…
and everybody thought you were really sharp and first class if you bought it for an obscene amount of money. Personally I thought they were idiots. I was working for a living and was not going to waste money trying to look fancy.

Robin Williams ( I think) did a bit on Perrier. The gist was when wanted to blow a buck on a bottle of water, he bought Perrier. This was some time 1990ish era. In the 1980’s, there were maybe a few foo foo bubbling waters like Perrier, Saratoga, etc. Then there were name brand gallon jugs of water like Deer Park. Then something happened in the 1990’s and those 20 oz water bottles started to proliferate.

Don’t care what containers soda comes in. Don’t need the sugar in standard flavors and sure don’t need the aspartame and other garbage they put in artificially sweetened offerings.

If I feel like bubbly I usually make my own, using a Fizz Giz tool and a Fizz Giz check-valve cap. It is a lot more economical than other home carbonating products. I get my bottle of carbon dioxide at the welding store.

If CO2 is such a mean and nasty global warming substance, why do we consume so much of it?

Coke is (was) my favorite cola but gave up drinking sweetened drinks of any kind. For me it’s unsweetened ice tea or the sparkling flavored waters (Bubly and such). I will buy Perrier when I can grab it on sale at Costco.

Here in Hawaii we built a plant to suck water out of the ocean. This is deep sea water that has never seen the light of day, nor been polluted.

“Koyo USA Corp. was the first tenant to produce purified deep seawater-based drinking water on a commercial basis at NELHA starting in 2003, and the first tenant licensed to use a new trademarked NELHA logo to certify its water source as 100% deep seawater. From its present site of 30 acres, Koyo USA Corp. produces a bottled water product, “Mahalo”, which consists of purified 100% Hawaii deep seawater, exported on a weekly basis to an enthusiastic, growing Japanese consumer market.”

So we take the water from deep below, settle out the salt and sell the pure water to Japan. What is left from the process is pure sea salt, which we package and sell to (drum roll) … Japan!

Keep in mind, Japan is sourrounded by salt water, it just isn’t pure!

So yes, in America we sell water, we sell dirt and we sell air.

I worked in Kentucky for a radio station whose owner also had a ‘silica sand’ company. This is a specific sand that was used to make transistors, etc. We sold that to Arabian countries.

Alaska Ice sells ice to Alaskians. They probably could make their own by just putting a container outside.