What is Clark Howard's definition of a recession?

Can someone tell me?

Otherwise when one party is president, a recession is slow growth. For another president, even negative growth for more than two quarters is expansionary. You need a consistent apolitical definition which is two consecutive quarters of negative GDP

But it’s more fine grained… industries or regions can be in recession while the country as a whole might not be. I lost jobs in the oil industry in 2015 and 2018, it was in a recession. The reality as it effects your life is more complex

Most definitely. Similar to how certain regions of the country will see a housing crash but most regions will see it only drop or rise a small amount.

The shortage of homes has caused the price to correctly increase in price. Homes will continue to appreciate in most markets though the higher interest rates is likely to soften any large increases

Can someone tell me?

I don’t know what Clark’s definition is

Clark’s pretty good, but he’s far from the official declarer… 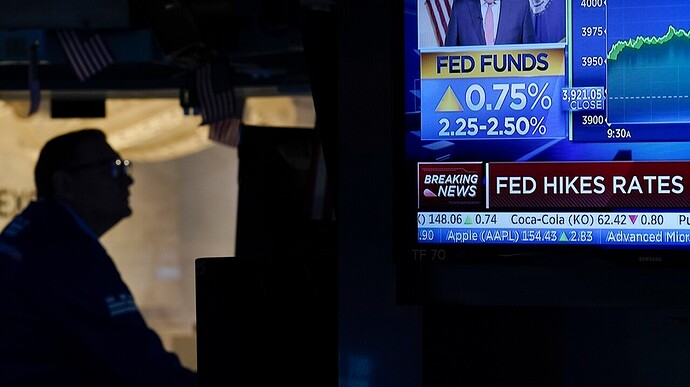 Is there a recession? Only the National Bureau of Economic Research gets to...

Commerce Department data this week found the U.S. economy shrank for a second quarter in a row, sparking a new debate about whether the nation is in a recession.   Negative growth in two …

And we know what side of the political spectrum these supposed nonpartisan group belongs?

And we know what side of the political spectrum these supposed nonpartisan group belongs?

Shoot the messenger time, I’m surprised it took that long, you must be stll using a muzzleloader.

The group referenced is, and always has been, non-partisan, and hasn’t made a judgment – they wait until all the data are in which could take a year or more.

The Bush / Obama Great Financial Crisis was never called a depression by anyone except politically oriented people. The official designation was recession, and it did officially span both Adminsitrations, I’m looking a table at NBER. In other words, user Smartpolitics is spreading misinformation which can be easily refuted. US Business Cycle Expansions and Contractions | NBER

It’s too early to call a recession for Biden. If it is, it will be called. I’m using real-time econometric indicators to manage my stock trading, and they are MIXED at present. The data are very noisy. We literally don’t know yet.

I’m looking a table at NBER. In other words, user Smartpolitics is spreading misinformation which can be easily refuted. US Business Cycle Expansions and Contractions | NBER

Using the data from the table, one could reasonably conclude that an 18 month period of negative GDP growth is a depression; the definition of a depression is six quarters or more of negative GDP. Allowing an organization such as NBER to call recessions instead of simply resorting to negative GDP allows the calling of recessions to be politically motivated

The issue is that GDP didn’t start going negative till July of 2008 not December of 2007.

You can’t have it both ways: either the Great Recession was less than 18 months or it is a depression. It’s frustrating that NBER is able to change the definition of a recession / depression from the standard definition of two / six quarters of negative GDP respectively

This post was flagged by the community and is temporarily hidden.

There are more Marxist professors than there are conservatives

You are always good for a chuckle no matter where you pop up, thanks for the laugh.

You are always good for a chuckle no matter where you pop up, thanks for the laugh.

Anytime. Laughter is good. I probably got that from Reason or PragerU or some conservative source so it’s definitely possible that it’s incorrect

But I definitely am ok with giving you a laugh at my expense here or at discourse.thelastforum.com

Anytime. Laughter is good. I probably got that from Reason or PragerU

Those sources are nearly as reliable as something from Trump U., but your explanation does have a modicum of twisted sense… I can’t believe I said that.

but your explanation does have a modicum of twisted sense

Because unlike conservative pundits like Fox Business as well as liberal pundits like CNBC, I can admit when I’m wrong which is a lot

Plus with the stress of two teenagers, poking fun at myself even nonsense brings much needed relief

It’s more like Potter Stewart’s comment in a SCOTUS decision on obscene materials - summarized as, I can’t define it but I know it when I see it.

The National Bureau of Economic Research (NBER) now declares when recessions start and stop, so Clark goes by their definition of recession when giving his advice and predictions.

The private nonprofit research organization defines “recession” a little more loosely than the textbook definition that was created by Shiskin in 1974. RECESSION: “a significant decline in economic activity spread across the economy, lasting more than a few months, normally visible in real GDP, real income, employment, industrial production and wholesale-retail sales.”

One reason for the change is that a recession is blind to the scheduled releases of the latest GDP data. The NBER doesn’t want to wait for the next GDP number to get printed to declare a recession, so it looks at several different data points.

Note that some major characteristics of a recession include higher unemployment and lower retail sales. However, stock market prices are not tied to the definition of a recession.

Hope this answers your question!

Pure and simple! 2 consecutive quarters of NEGATIVE GDP. Anything else is and opinion. And they are like buttholes. Everyone has one

One man’s opinion… every man has one…

Not opinion, but FACTS. Some are offended by them, but so be it. The facts are facts.