Investment Advisor for US Citizen living in Germany

My sibling is a US citizen who has been living and working in Germany since 2006 or so. Not military. Based on her work history prior to moving abroad and an inheritance when my parents died she has a few USA Fidelity accounts (traditional IRA, brokerage, Inherited IRA) totaling perhaps $500K (not sure exactly).

She is trying to get some investment advice–one-time or ongoing, but when she calls Fidelity or independent advisors in the US, they say they cannot work with someone living in Germany. I had suggested that Schwab seemed to promote working with international clients (“Schwab International” or something) but when she called them, they gave her the same line, that even if she moved the accounts to Fidelity, they would not be able to help with investing advice. I had also suggested Garrett Planning, but even if we fake a ZIP code for her (like use the one where my parents lived), they will give her the same response.

Does anyone have experience wth this? Does it go back to some of the terrorism laws or something? Again, she is a US citizen and is required to file US tax returns. Ways to get around it? She would not want me to see her finances accidentally, so listing my US home address on the accounts even if everything is set up to receive statements online probably isn’t an option.

She’s trying to keep the US money separate, not patriate it to Germany right now. Both because of the limited investment options if she was to invest solely through German brokers, wanting to have funds available in US Dollars, and because she may eventually return to the US to retire.

There must be other US citizens who leave the country for extended periods giving up their US permanent address. They can’t all be SOL. Any leads would be appreciated.

even if she moved the accounts to Fidelity

I mean even if she moved the accounts to Schwab. I’d edit it directly but that seems to get my post quarantined.

Yikes. I don’t know the reason/laws about this.

Would a PO Box help? And do any of the private PO Boxes provide forwarding services?

Thanks for the link. I’m not sure if the reps pointed her to that, but it is essentially what they have been telling her. I’ll pass it on. The item about not being able to buy mutual funds is concerning.

It’s possible, and seems the best lead. You typically can’t use a USPS “PO Box” as a “hone address” but you can slip by the edits with a private mail forwarding service. (I use one but I’m not an expat). To set that up though they all typically want a USPS form 1583 which requires a notary signature. Getting a notary signature is like a pre-scheduled day-trip to the US embassy for her unless she got it on a trip back to the US. The idea of the USPS form is so that criminals don’t just start intercepting people’s mail without them knowing.

I think if I lived overseas I’d use my daughter’s US mailing address, then talk to the Advisor using my Ooma app, a VOIP phone line which would caller-id as my US home phone number. Or I’d login remotely to a computer on US soil and carry on self-managed with Fidelity. I chafe at stupid laws where me breaking them is victimless.

PO Box is a red flag. You should get the driver’s license or ID card for the state you are claiming to reside in, register to vote there, etc. You should have some bills going there. That’s a big commitment. But if the financial institutions demand ID, you need to be ready.

Agreed. Sis isn’t particularly technical though so I’m not sure how familiar she is with VPNs and IP phones. I don’t want to be her tech support.

@Doh I just had an “AHA” moment. You say no financial planners want to work with her. That means when they saw her coming, their vision of how to engage with her was limited to getting her assets under management (AUM). Seeing this would be a problem legally, they don’t even want to have a conversation. They don’t even want to do any consulting for a fee on basic things like building a basic retirement plan. I mean… that doesn’t involve any assets or securities or trading… that’s just advice! There’s no Federal law against advice, for God’s sake.

When you think about… it’s pretty damn sick. It’s like a doctor refusing to treat you because you’re not insured, or because you won’t sign up for their concierge medical services, or whatever… because they have such a limited imagination and cookie-cutter mentality they THINK you won’t make them enough money. It’s so frustrating. This reinforces my belief… most people in financial services aren’t very smart. They’re just salespeople, to be honest.

So maybe all of us can provide crowd-sourced basic planning right here for free. How much can you tell us all about her life and life stage and goals? Is she born mid-1980s went to military age age 20 to Germany and is now about four years away from full military retirement or is that a wrong guess? Or a corporate employee? Kids? Married? Vested in any German state health or retirement plans? Debts? Approximate age? What’s the $500k invested in now? Wants to live in the USA later? How many years has she put into the US Social Security system?

What problems is she trying to solve? Retirement, long term care (self or other or both), college for someone, starting a business, providing for someone with special needs, charitable giving… what’s the scope of the plan?

They don’t even want to do any consulting for a fee on basic things like building a basic retirement plan.
What problems is she trying to solve?

We found some (3) people on Garrett Planning who claim to deal with expats, so I think she is trying to contact one or more of them to see if they can help.

I don’t know exactly what problems she is trying to solve, or her complete financial picture across both countries, so that is really why she needs someone independent who can help focus her. I can make some guesses about things, but some of the financial planning questions I would have to ask to be of help would pry more into her affairs than would be comfortable for our relationship. She probably has enough US credits to get US social security, but it won’t be much. Most/all of her high-earning years have been in Germany and I’m guessing that means her German state pension will be quite nice. I don’t think she has many/any stock market investments in Germany; most of her money there has apparently gone to buying her personal residence and a rental property. She talks about some employee stock options she got/gets as an executive, but I don’t know any details of that.

When I’ve talked with her about investment philosophies or strategies, I’ve gotten mixed messages; she seems to know some about keeping fees low, index funds, and asset allocation. But then another time I asked her a question (I don’t remember the specific question or actual quoted response) and it seemed her goal was more along the lines of she wanted to blow the lights out. So it seems like she may have some unreasonable risk/growth expectations. She’s also asked me market timing questions like “is now a good time to invest in X”, which contradict the initial impression I had that she was on board the Efficient Frontier train…

Her case sounds complex. She needs a good planner who understands the German and US retirement systems, her tax situation, maybe currency hedging depending on where she decides to retire.

A relative of mine inherited a property in France, sold it, and by the time she extracted the cash back to the US, most was gone to taxes and legal fees. It was a really terrible experience. I wonder if there would be as much friction and illiquidity for your relative. These are the things the planner has to know about.

I’m not on the efficient frontier. I think markets are efficient, but on a span of time than exceeds my ability to endure at age 61.5. I use long term trendfollowing to manage risk. Gary Antonacci’s work exemplifies what I do.

She should be able to receive her German pension even if she moves back to the U.S. Whether in euros to a German bank account or dollars to a US one, I don’t know.

If she doesn’t quite have 40 quarters she needs to qualify for U.S. social security and medicare, she can use some of the credits she paid into the German SS system. U.S. social security will not, however, give her credit for her earnings in Germany. Her work record will show a bunch of years with zero earnings, so she’ll likely get the minimum benefit from SSA.

If I recall, it’s not possible to get both the German pension and U.S. social security. 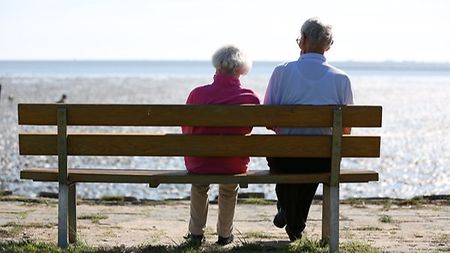 You have worked in Germany, now live in the USA and want to know how to apply for a German pension? This webpage provides information on the application process, pension authorities, possible effects on your US Social Security and more.

This page provides information on how to avoid dual U.S. and German Social Security taxes, as well as how to apply for benefits under the U.S. social security agreement with Germany.

She has looked for advisors based in Germany, starting from the German side rather than the US side, but hasn’t been impressed with what she has found. I don’t know/remember any of the details, but a lot of finance and investing works differently there. She speaks fluent German, so that isn’t a roadblock.

Thank you, I’ll pass this information along. I am familiar with my parents who got both a UK pension (work history before age 28) and US social security (work history age 28-67). They retired and stayed in the US. The UK pension was paid out in USD to dad’s credit union account. Looking over his files after he passed, he was pedantic about tracking the exchange rate they were giving him (the UK government, not the credit union), I’m not sure why. I didn’t know if that was something I should continue to do for my mom’s UK spousal pension, but decided not to–I couldn’t find any record where he had filed a dispute or something. The only hassle was that reporting the UK pension to the IRS required submitting paper tax forms and couldn’t be e-Filed. The UK had a scheme where they could pay in money in lieu of a few missing credits to boost their benefit, I’m not sure if the US SSA has something similar?

I assumed that receiving a German pension in the US would work similarly, and that receiving US social security in Germany would probably be heavily taxed, but that was without confirming the actual pension agreements between the two countries. She’s got another 8-15 years or so depending on when she starts claiming benefits, but is something she probably should start understanding and planning for as well.