I am not… my wife hates to waste stuff so I would have to eat this crap even if there was no necessity… a fate worse than death.

==
I had K-Rations in the army… the only one that was edible were Pork and Beans… the rest were far too salty.

I understand that the new MREs are better.

Many members of the Church of Jesus Christ of Latter-Day Saints, aka Mormons or LDS, store emergency food supplies aka “food storage.”

One of the more recent tools of folks who practice food storage is freeze-drying. It involves a fairly hefty investment of $3,500 - $5,500 in the necessary equipment but the result is surprisingly tasty food which will remain so for 10-20 years. 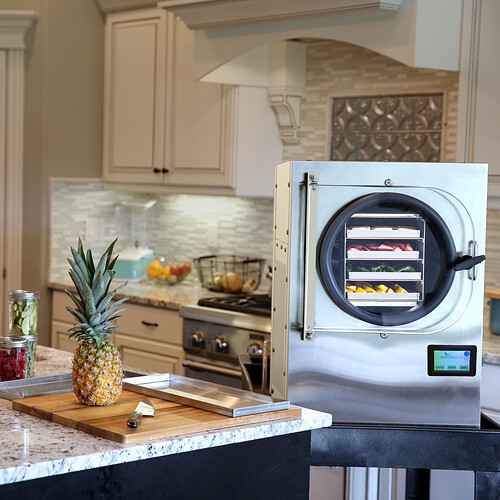 Freeze drying at home with a Harvest Right freeze dryer is the best way to preserve food for your family.

We do have emergency buckets for our household for a short period of time. Several of the top prepper websites have reviews of the various Emergency Food sites comparing the taste and versatility of the foods/meals. They really are our backup should our concentrated food storage run out. We have been studying food storage and preservation methods since early in the pandemic, learning canning, food dehydration, and other methods of food preservation. Biggest issue we’re trying to work on now is increasing water storage. Just look at Mississippi this week and note the issues occurring all over the globe.

It is a two-edged sword here in the islands I guess.

Most of our products (food, clothing and stuff) comes from other places and most arrives by boat. Should a disaster happen, Oahu has a 3 day supply of food while the Big Island has a week to 10 days. That is because we are rural and have few people per square mile compared with Oahu.

However, the caveat is that we here on the Big Island could be self-sufficient during an emergency IF we closed the ports down.You see, much of our produce goes to the resorts. If you eliminate the guests, we should do fine, assuming that crops are not damaged with a storm or radiation, etc. In fact, my side of the Big Island has not had a hurricane in recorded history.

I am not a prepper but could become one easily. I have 9 acres and could convert that to vegetables, more fruit and coffee (because are you REALLY living without coffee?) or I could even raise some animals. We all ready have feral pigs and goats to last a long while.

We have a ready supply of solar. In fact we just shut down our last coal-fired plant (but still use oil I guess). We use processed rainwater so there is no massive processing that takes place there. The weather is conducive enough that we do not have to have cooling or heating year-round although some people enjoy it.

Just last week I gave away my emergency food horde I had during COVID. It was a 12 pack od Spam, which I never opened but could have (I don’t eat the stuff but hey, emergency stockpile!).

So a stockpile of food and/or other preparations kinda depend upon how much infrastructure you depend upon. We often lose power but I have a generator which runs on either gasoline or propane, thus reducing the chance I will be out of power due to a lack of one or the other.

We often lose power but I have a generator which runs on either gasoline or propane, thus reducing the chance I will be out of power due to a lack of one or the other.

Just had the Propane Tank filled $2.90 a Gallon…

About .50 higher than last year.
What is it like there?

I only swap out tanks at Walmart or other retailer. The Blue Rhino BBQ size are about $22 a swap. I have not been to ACE locally who refills tanks, so I don’t know the cost there just for the propane.

Current gasoline prices (regular) at Costco $4.85. It can go up to $5.85 for a Shell station on island. We do not have discount gasoline stations like Speedway. Our Costco sells diesel and no-ethanol fuel too.