Would people be interested in monthly updates here? Clark doesn’t talk about his account much these days.

I think I have a particularly good algorithm for picking notes too.

have 125k left on my mortgage, instead of paying it off, I put 125k in prosper and withdrawing $968 monthly.

Prosper is high risk; the returns in my opinion don’t adequately reflect the risk. I’m not sure if commercial lenders are also on the platform or if it’s solely P2P

If you want to go up the risk spectrum, you can look at balanced funds or buy stock and bond index funds

Prosper is high risk; the returns in my opinion don’t adequately reflect the risk. I’m not sure if commercial lenders are also on the platform or if it’s solely P2P

@Mon40 looks like you made out pretty well! Well, you made the right choice when interest rates were zero, I’m just not sure it’s the right choice moving forward, now that there is competition in the fixed-rate marketplace. The 30-day SEC yield of HYG (high yield or junk bonds) is 8%. It has 1200 holdings, companies like DirectTV, Caesar’s, Teva, Intelsat, American Airlines, Sprint, Dish, Tenet Healthcare, Carnival, Western Digital. I’d trust those more than a highly concentrated bet on Joe the Plumber.

When I used Prosper and Lending club with my mad money, I liked people that had low debt to income DTI ratios, higher credit utilizations, and with a 740 credit score though those with a 620 credit score, the capacity to pay, and a recent bankruptcy filing were also ok as it’s really hard to file multiple bankruptcies within four years. I treated the account as my speculative account and lent to A to D borrowers.

So glad you mentioned this. Here are my parameters
We all know from Clark that many people could have better score if they had more than one credit card. So I am trying to capture people with High Utilization (30% of credit score) but good/great debt to income ratio.

It’s super narcistic of me to think I can judge risk better than the banks, I realize that, but I still think that thanks to Clark’s knowledge I am in with a shot to actually do ok. 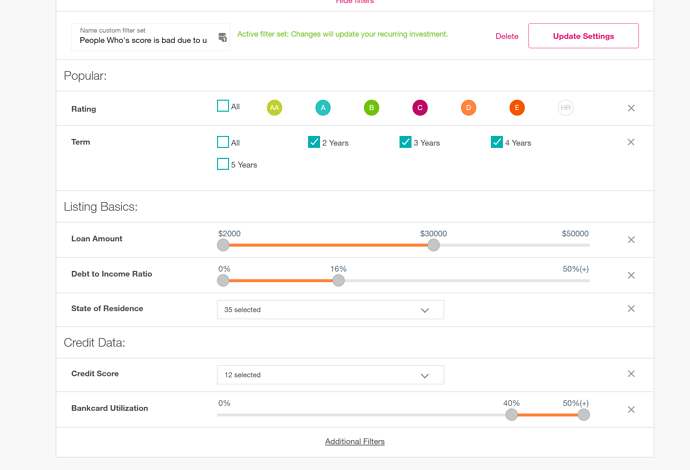 I used to get over 10% return with Prosper, but that was then and I had chosen a higher risk. We could read details of why they wanted the money. If it was a financial person who needed money, I skipped. If it was a loan for a wedding or honeymoon, I skipped - not going to help a new couple get into debt. If they can’t afford the wedding or honeymoon I figured they were doomed from the start.

I invested in a ‘raw milk’ producer. I figured out who it was, they had a dairy farm, were respected, were selling milk at a parking lot in town, the state allowed raw milk sales and they had lots of customers. The loan was for a refrigerated truck. I figured that was a safe investment as there was a vehicle which could be sold or attached if they ran into trouble. They paid every payment of the loan except the last one so I was only out a small percentage of the loan.

Now you can’t really tell excatly who or what the loan is for compared to before. I lowered my % rate and allowed automatic investment. I am currently at 6.75% but do not have a lot of money there.

I made 5.7% in the same time period with Vanguard’s Wellington and STAR mutual funds. No algorithms, no worries and no sleep problems. Wellington has been doing over 8% average since 1929.

I made 5.7% in the same time period with Vanguard’s Wellington and STAR mutual funds.

Yeah, this seems like a more useful comparison than “the lowest interest rates in history.”