GenZ getting hammered in the stock market

AMC, GME, other meme stocks… these things are not the backbone of wealth building over the long term. GenZ thinks of themselves as YOLO long-term hodling “apes”, but at some point they will panic and sell at or near the bottom and avoid both meme and quality stocks for years to come, which will hurt them. 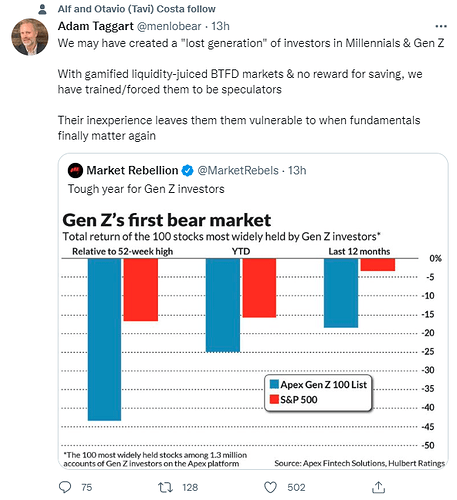 What an opportunity! If there’s a time to make up for a screw up, the time is the best

That’s the conventional wisdom, mess up while you’re young, but on the other hand, many Greatest Generation kids (say those born around 1920) who grew up in the Great Depression never touched stocks for life, which made them poorer. My GenZ kid I’m advising to YOLO after the next large bear market, whenever that is, for now she’s set up pretty conservatively.

For us Geezers who have done well in the market but are behind the times.

YOLO - acronym meaning you only live once , used to express the view that one should make the most of the present moment without worrying about the future.

YOLO = put it all in on something (usually something risky with a very high expected return).

And every generation does it - Boomers / GenX did same with tech in 1999 - 2000. Tech crashed and only broke even in 2015 was it? Buying at the wrong time can create a severe retirement challenge.

Silent Generation and Nifty Fifty stocks in 1970. Then there was the Roaring Twenties of course. “If only … people wrote down what happened and we could learn from their experiences!”

My YOLO investing period was between the ages of 18 and 50. During that time my investments consisted of fast cars, boats, airplanes, diving gear, and surfboards. Oh… and one $75K TDSP that I was shamed into by my wife. I DID have a defined benefit pension that matured when I was 52.

But I’m a geezer…

Very, very few have a Defined Benefit Pension any longer… That’s one of the problems. 99% of people suck at portfolio management. And yet we are cast in to the wilderness and have to do it

Defined benefit plans were offered by many large employers as a way to discourage unionization of their employees. Salaries vs hourly compensation plans were also used for that purpose. That arrangement allowed me to take full retirement (50% of my prior 10-year avg income + medical coverage) at the age of 51. It made the task of getting to retirement much easier than most.

But you are wrong about 99% of people being poor market players with their own investments. The number is 100%. The reason for that being the case is that everyone driving the market is under the delusion that they are making logical sound choices. They are not. They are making guesses about other people’s guesses about what has yet to happen. It’s fool’s game.

A more reliable, and a more potentially successful strategy is to diversify your portfolio among several investments like mutual funds, bonds, metals, real estate and currency without borrowing any money.