My wife and I have found ourselves on a last minute trip on the other side of the country this week. We expected higher prices for everything, but we didn’t expect an incredible amount of customer no-service from a large national rent-a-car company!

My wife received a call about a week or so ago that her sister had passed away, and we made arrangements to travel from California to Massachusetts to attend the funeral. We knew perfectly well from the start that this trip wouldn’t be cheap, but we found flights, lodging, and a rental car for rates that weren’t exorbitant, and we booked with large chains that we figured we could trust.

When we arrived at Logan Airport in Boston on Saturday after our flight, we headed for the Avis counter at the rent-a-car center. It took about 45 minutes to check in and get everything arranged due to the crowds, and the customer service agent we dealt with was excellent, even explaining our options for dealing with tolls out of Logan. We went and got our full-sized vehicle from the lot, whose outside had been cleaned so recently it was still wet. We didn’t get a full tank of gas, which was annoying, but not a big issue, so we started on our way. We got on the road to our first hotel (we ended up splitting up hotels due to availability), and at first all seemed fine. By the afternoon of the first day, we started noticing things about our rental car.

The car was a 2018 Ford Focus, and it ran just fine. We were aware of the lack of rental car inventory due to COVID-19, but were still a bit surprised the car was that old. In any case, it became clear that the inside of the car hadn’t been prepared as well as the inside. The front and rear windows were so oily and dirty it was difficult to see well through them; we could even see marks from suction cups on the front window. The carpeting in the passenger footwell came out from where it had been pushed into the dash. There was actually a footprint on the back of the river’s seat! When we entered the car after it was parked for a couple of hours in the sun, my wife smelled a vague smell of marijuana, but figured it was her imagination; I can’t smell much of anything unless it’s intense, so I couldn’t confirm it. We chalked it up to the Avis folks being in a hurry to prepare the car and left it at that.

By Monday, the oily and muddied windows were getting to my wife, and every time we got into the car after it sat in the sun for a couple of hours, we encountered that smell – and by then family members confirmed it and even I noticed it to some extent. Not wanting to get stuck with the $250 fee for smoking in the car, we decided to call Avis’ customer service line.

We called the local number for the Avis at Logan and were directed to a call center. We attempted to get our concerns across to the customer service agent, who passed us on to a supervisor, who passed us on to a second supervisor, who passed us on to a third. By then, having had to explain the problem to three people who could do nothing for us other than apologize, my wife started her talk to the fourth person by apologizing in advance! At least this person had the authority to do something, and gave us a $75 discount, informed us we could return the car without being charged for gas at the end of the trip, and were informed that if the oily and muddied windows became an issue, we could return the car to any Avis location to replace it. We figured that would be fine.

On Tuesday night, we got rain, and the darkness, rain, and oily/muddied window interiors now made it difficult to see outside. After the funeral on Wednesday, we decided we needed to exchange the car. Based on advice we got on our previous call, we found a nearby airport location in Bedford, and called the Bedford office to ensure they had a car of the same category available to swap. Again, we were routed to the call center, and we were assured Bedford had a vehicle of the same type available. When we got to the Bedford airport location after a 40 minute drive, we went to the desk. The customer service agent there, Anthony, was shocked by what we were told by the call center, because all the vehicles at Bedford were rented through Friday, and he was able to confirm that Logan had no more vehicles available either!

When we headed back to our hotel, we spent another long while on the phone with the Avis call center. More apologies from customer no service, more explanations from us, and the supervisor knocked off three days of daily fees off the car rental. She also assured us that if we contacted the roadside assistance number and gave them our case number, they’d deliver a replacement vehicle to us at the hotel. We got to the hotel, called Avis roadside assistance, and were told that they could take us to an Avis location to get a car, but couldn’t bring one to us! We already knew there were no cars at the Avis locations nearby, and that taking a long drive to another location to get another car that might not be there didn’t make sense. Another call to customer no service ensued, where we were told we could negotiate some sort of settlement when we returned the car to Logan.

I’ll give credit to the in-person Avis customer service agents and roadside assistance for being helpful and honest with us. But Avis’ call center is a quagmire, with agents who have little power to fix things and supervisors who either don’t have a clue as to what’s going on at their rental locations or just tell you whatever the script says! This will be our last time renting a car from Avis, and since we rented the car through an affiliate link with USAA, we’ll be advising them of our poor experience.

Meanwhile, I guess we’ll need to find an auto parts store to find a degreaser for the windows and an air freshener! 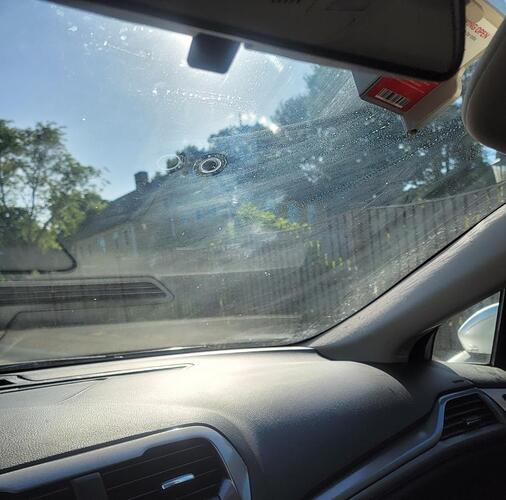 When you went to change cars, Did you ask them to at least clean the one you had?

I don’t even rent cars any longer. I use Uber and transit. My family is in Seattle, when I visit them I use the super light rail train from the airport to their neighborhood.

They didn’t offer and we didn’t ask. All the person told us at the counter was that he couldn’t help us. We needed to meet our family at the wake, so we couldn’t have waited for too long, but we would have at least considered it.