To much savings going to retirement

Do you think it is possible to save to much money into your retirement accounts?

We are doing the following:

Methinks it’s impossible to save “too much” money.

Agree with Rob’t I don’t think it is possible to have too much, but you could very well wind up to heavy in the “qualified” category aka regular IRA . In that category you have deferred taxes and not paid any at all, so the gov’t is going to treat distributions as so-called ordinary “income” and expect you to pay tax since you did not.

In my building years, Roth did not exist so we wound up heavy in the regular IRA. Hit 70 or so and gov’t expects Required Minimum Distributions to be taken each year, and of course you have to confess “income” in the year you take them. One big exception is the Qualified Charitable Distribution where neither you nor your charity pays “income” tax on it. Opinion here is if you accrue so much that an RMD exceeds the limit for a QCD ($100k/year) that is too much. I for one am happy to have “not too much” but also other resources such as Roth, so I can (so far) give away all my RMD. If I really need some of it, of course I can take it and confess the tax.

Your question suggests that you don’t have a numerical retirement plan — what are you using to determine how much to save, how to invest, and what to expect as your standard of living? I used to use the Schwab tool, have moved over to Fidelity retirement planner, and also use FIRECALC.com

Never used it, so maybe it’s great. However, my ex-coworkers get together once every year and after all the catchup chat, finances becomes a topic. Almost without exception, everyone agrees they spend less in retirement than they expected.

I am just maxing out as much money as we can. We do live in expensive state and probably retire here.

So trying to build a huge nest egg

Anecdotes are interesting and can lead you down a path of inquiry, but you must do the math. Retirement study after retirement study all conclude that less than half of near retirees have even tried to calculate how much they will need for retirement. Yes, and due to inflation a 70 year old recent retiree might think they saved too much but by 85 they have to move in with kids because their budget no longer works. Please don’t be that person.

So trying to build a huge nest egg

Please don’t be that person.

Thanks, but believe me, I won’t.

You can’t save too much, but you didn’t mention the biggest factor, your age. 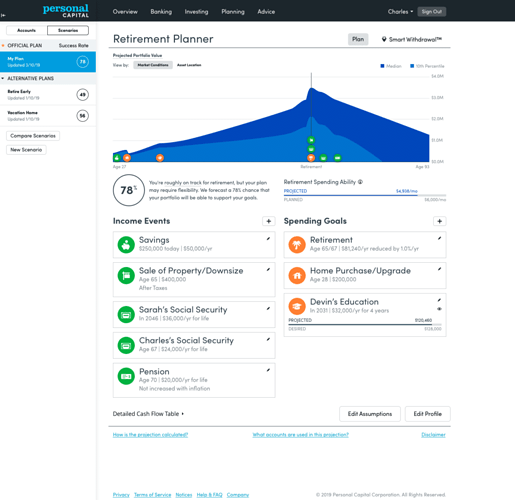 We reviewed 15 retirement planners to find the 5 best retirement calculators based on cost, features and ease of use. Covers paid and free apps.

I would say no…

If you’re scrimping to save and not enjoying life now, then continue that after you retire because it’s become a habit, then yes, you can save too much money. If not, then it’s better to have too much than not enough.

My husband just retired and we learned a lot going thru the process. Wish we had known what we learned sooner! For instance, if you take SS early at 62, your benefit check will be less since you started early. But also if you quit contributing early, your benefits are reduced. Double ding. If you go online and get a SS account, you can access your work record and contributions thus far and play with the numbers to estimate what your monthly benefit would be if you retired at 60 and started taking at 62, or whatever scenario you want to try.

Income tax rates are low right now, likely to be higher in the future. So, consider a Roth 401(k) instead of traditional. Pay lower taxes now, withdraw tax free in the future (assuming Congress doesn’t change that benefit of Roths).

Before retirement, we were able to pay health insurance premiums with pre-tax dollars, but now we can’t. I’m not sure if that applies to everyone, but see if it does for you, or in your planning pencil in paying Fed and State taxes on an extra $5000-$10000 a year to be safe.

I recommend getting a retirement calculator! They’re great. Can suck up your weekends, though.

Do you have any other investments? Emergency funds? CDs?

Is $78,000 all that you have saved total for retirement or is that what you put in the last year and keep intending to put ?

If you save too much and find out you have too much, you can learn to be more generous…

That is a great thing, but can be challenging to do, as habits are hard to be broken.

Are your funds invested in target retirement funds?

Keep up the good work.

78k is what we are putting into the four retirement accounts this year and we been maxing the four accounts since 2020 with catch ups.

Before we were amore conservative on our contributions to the 401k plan.

Take advantage of your last higher income years in savings toward retirement, as well as to help increase your Social Security benefits in the future.

It’s normally harder to add money for retirement, after you’ve left your last job, although many people are able to freelance once they retire.

God luck. I retired at 63 and wife at 61 and we haven’t looked back! We love retirement and traveling. We loved our work, but we love our retirement.

Wish we had known what we learned sooner! For instance, if you take SS early at 62, your benefit check will be less since you started early. But also if you quit contributing early, your benefits are reduced.

You really didn’t know those things until your husband retired? I feel like I’ve known both of those things forever (which is obviously an exaggeration, but it’s been many years), and I won’t be eligible to retire early for another 15 years.

Income tax rates are low right now, likely to be higher in the future.

Probably not true for the vast majority of people because they have less income during retirement than before, and because of the effect of marginal tax rates (contributions save taxes from the highest bracket, withdrawals fill the lower brackets first). For super-savers like OP, it probably is true.

You just have to run the numbers with a good retirement planning tool that uses “Monte Carlo” simulation and accounts for inflation. Otherwise it’s all speculation and guessing. There is no way to know if you’re ok just because you’re saving $78k annually recently. Just run the numbers. If you’re not willing to, please stop asking all of us here online, because we haven’t the information to possibly make any type of informed commentary on your situation.