I have been getting calls this morning because people have seen the news of lava flows on the Big Island. I’m fine.

Although the lava flow is somewhat near my home, it is flowing in the opposite direction into an unpopulated area. We are rural (the size of Conneticut but with only 220,000 people).

Kilauea is the one at the volcano park that has been flowing for years. Mauna Loa (this volcano) has not been flowing since the 80’s. It is the largest volcano, 13,500 feet above sea level and another 20,000 to the ocean floor. It has an area of 2,035 mi².

Visitors here are in luck. Airlines are allowing free rebooking if needed, the remote lava lights up the clouds causing red and orange glowing in the sky at night, AND we ahve a winter storm warning with snow already covering the tops of the two tall volcanoes.

Turns out that the flow is away from my farm. HOWEVER, if it changes direction, the experts say I have between 3 and 14 hours to get out. That is not as comforting as you might think

In the lava flow a few years ago, many people lost their homes. Well, they didn’t really lose them, they were just buried under rock. The worst thing is to have a mortgage because you lose your house and the ability to live on the land for quite some time, but you still get to pay the mortgage.

In those locations a few years back, their insurance (if they had it) was with Lloyds of London as the only insurer who would cover them. Then Lloyds was hit with suits.

At present 2 of the 5 volcanos on the island are erupting. Kilauea which is near the volcano park and now Mauna Loa which covers most of the lower half of the island.

Naturally, these are big tourist attractions and I expect looky-loos (a technical term) will be booking travel here now.

and reports and data

Mauna Loa volcano began erupting in Moku‘āweoweo Caldera on November 27, 2022, at approximately 11:30 p.m. By 6:30 a.m. on November 28, the eruption had migrated to the upper Northeast Rift Zone. No property is at risk currently. There is a visible...

My neighbor took this photo just a few hundred feet from my house.

That is not a sunset (which would be behind you), it is the glow from the lava just over the crest.

Tens of thousands of people have traveledto see the flow and the County is setting up a safe viewing area within the military training area. 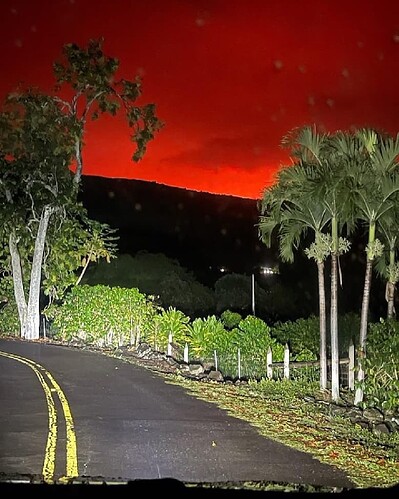 He took this photo up island on Saddle Road.

Hey Lavarock, I have friends in Hilo. How close is this to Hilo?

It has been going to the northeast, so not towards Hilo. Also, officials have determined that South Kona (where I live) is now not in danger. The flow continues towards Saddle Road, If it crosses there, it will cause quite a bit of inconvience as that is a shortcut across the middle of the island. Taking large tractor tailers around the islands circumfrance is more time consuming and some bridges are still being repaired. The County has set up a temporary viewing area and tens of thousands of people have viewed the flow. So far, I have not. I have walked over fres crusted lava before and seen it glow through the cracks beneath my feet. Seeing it miles away is great for some, but I have been closer in the past.

For those interested, here are some official photos and video.

OK, so an update:

What is more dangerous than parking to view a lava flow? Getting off the official path and stumbling upon a grenade. After all, it IS a military training area.

Here is the FORBES article from this morning

The grenade ended up being a smoke grenade, so not explosive. It was detonated.

From atop the observatory location on Mauna Kea, you can see the lava flow down Mauna Loa. 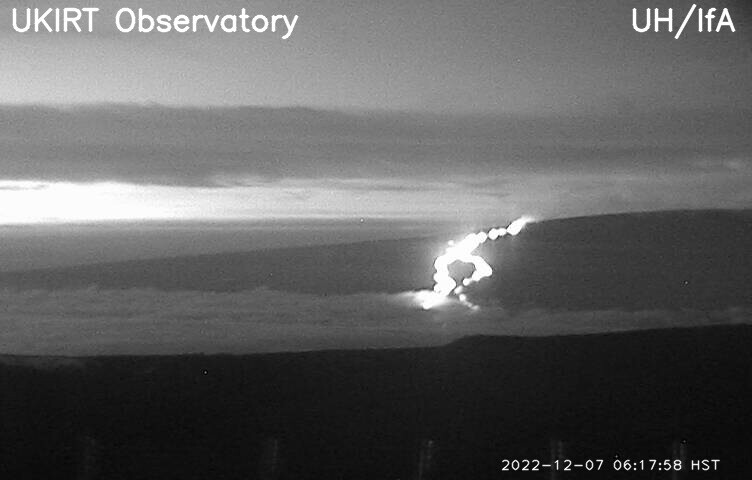