Governor is asking us to, “defer using major appliances such as the stove, oven, dishwasher and washer and dryer from 4 to 9 p.m. today to conserve energy and alleviate stress on the power grid during today’s heat wave”

Rolling blackouts and outages are predicted all over the state.

So how do we manage the grid with the expected +100 million EV’s?

Can’t speak for Cali, but in Arizona, most with electric vehicles charge them during extra low peak hours…something like 11pm to 7am? I don’t have an electric car, and really do not plan to, but I’m on a different, and even lower cost electric plan that includes a demand component during on peak hours.

Climate change is going to bring down all kinds of infrastructure and agriculture and water resources that humans depend on. Things we use are engineered within limits. European rivers so hot now French nukes have to power down because they can’t get cool enough. Ooops. The laws of physics and chemistry and hydrogeology don’t give a rats a## about any of our “freedums”.

So how do we manage the grid with the expected +100 million EV’s?

I’ve owned a BEV since Feb of this year and have never charged it anyplace but my garage. Both the car and the charger have the ability to schedule charging. The car can be set to start and stop any time of day. The charger will look up your electrical utility provider and suggest the ideal time to charge your car based on the payment plan you have.

So… rather than pose a problem for our electrical grid, EVs have the real potential help solve the problem of uneven power demands by scheduling their charging times to help balance the power demand over the 24 hrs of the day.

EVs are not a problem, they are the solution to lots of problems… and… they’re FUN to drive…

Okay, even before the potential hundred million EV’s are here yet, Cal is already in trouble, with forecasts of blackouts and rolling blackouts.

I do not see how a hundred million EV’s will help solve it.

I do not see how a hundred million EV’s will help solve it.

The reason excess after-hours power goes to waste is because fossil-fueled electrical production plants can’t be just switched on and off at will, it’s an hours-long process, and, it places undue stress on the systems subjected to it.

So… When EV owners charge during off-peak hours… #1. The power production is more profitable, and… #2. The EVs are using energy that would otherwise go to waste, and… #3. They are not adding excess carbon to your atmosphere .

A major cause of blackouts during a heat wave is daytime cooling requirements using electricity.

We agree on that.

Check out what Clark Howard has to say about America’s energy situation in this video:

Also check out this 2020 Slate article: 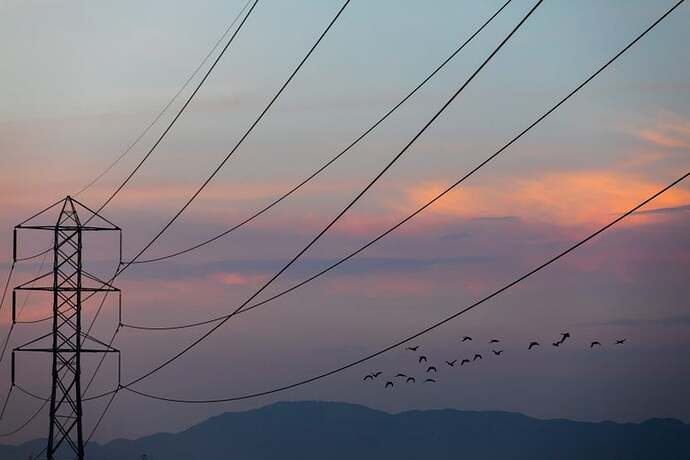 Sometimes the features of a wind-and-solar system turn out to be bugs.

I’d get an electric bike to commute to work and do errands but I have no where to store it ( live in an apartment; not leaving it outside in this New England winter).

I see guys at work climbing into their 2+ ton Fordolet pick up truck to commute. Fuel economy? We are accepting $3+ gallon gas now. Wait until the next quantum price jump takes us to $10 a gallon temporarily.

I’d get an electric bike to commute to work and do errands but I have no where to store it ( live in an apartment; not leaving it outside in this New England winter).

Look into electric folding bikes, there are several brands. You can likely sneak them inside, or stash inside the trunk of your little-used car.

When air conditioning started to become commonplace in homes in the 1950s and 1960s the electrical grid had to be beefed up to accommodate. Same thing will have to happen for EVs. I’m not worried about it.

Where does the money come from to do this, given unprecedented public, corporate, and family indebtedness ? And the money need to storm harden coastal cities, move Texas / Louisiana refineries from the Gulf Coast, come up with new water for the West, and on and on? I’m just not really confident. Things don’t have to work out .

Me neither. Considering the overwhelming disagreements on all sides on almost every topic, getting national cooperation for perhaps a Trillion dollar upgrade will not be easy.

Electricity is a product sold by utilities. EVs will create more demand for electricity. Additional infrastructure to produce electricity will be paid for by selling more electricity.

Additional infrastructure to produce electricity will be paid for by selling more electricity.

Users have to have free cash flow to pay for this power and new infrastructure. Reminds me of two lost, starving economists wandering in the wilderness. Suddenly one begins to smile then laugh. The other asks why? " Oh I’m dreaming of the delicious sandwich my unmet demand is going to generate!"

Anyway no one wants electricity. They want climate control, cooking, light, entertainment, and now EVs. Just like no one wanted whale oil, they just wanted light.

Yes, because people use more. If they don’t want to pay more, they can use the same amount they are using now and pay something more similar to what they pay now.

It’s not like the utility management has to convince fickle voters. They go to the PUC, say “we need to build new lines at a cost of X, and to make enough money to pay for it, rates have to be Y.” The PUC, which knows how utilities work, approves it or requires changes. The lines get built.

Also, if you’re going to argue that the costs are prohibitive, you need to account for the costs of gasoline offset by the electric cars.

Also, if you’re going to argue that the costs are prohibitive,

And the electrical power to this new system comes from…?